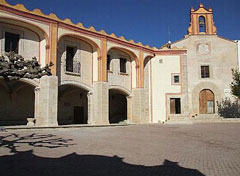 Valencia is situated in the south-east of Spain. The name of Valencia is not only the name of the province and its capital, but also the name of the official region of Spain including Alicante and Castellon. Valencia has its own dialect (Valencian language is a dialect of Catalonian language) and its own history. In the Middle Ages the Kingdom of Valencia was an independent state under the dinasty of Aragons. Nowadays the citizens of Valencia are part of a great country, a popular and successful tourist region of Spain. Lots of English, German and Skandinavian tourists come to spend their holidays in Valencia every year. The region of Valencia impresses with its diversity, the relics of an ancient culture with the sights, the Valencian hospitality and constant good weather. The Region of Valencia is worth a Travel - and offers a bunch of wonderfull oportunities.

It is difficult to believe but even 60 years ago this part of the country was not developed for Tourism. The main occupation of its citizens was agriculture, and still today many People earn their money in Planting Fruits and Olives for whole Europe. In the sixties of the 20th century there started an economic boom in Spain. And Valencia started to develop as a tourist region. For ten years the Mediterranean coast of Valencia, Alicante and Castellon changed from a poor fishing and farming district into a great fashionable region for travellers spending their summer Vacations at the sunny meditareanian coastline of Valencia. The pearls of resorts for summer holidays - if possible to declare only one per destrict - are Benidorm in Alicante, Gandia in Valencia and Peniscola in Castellon.

The tourist agencies in Valencia offer different kinds of holidays to different tourists. If you come on holidays with your families you will have entertaining and national parks and a great choice of rather cheap comfortable family apartments at your disposal. Those who are interested in active holidays can do different kinds of sports: playing football and tennis on excellent fields and courts, yachting, going for walks, riding a horse or a bicycle, playing golf or water skiing. If you prefer lying on a beach you will have an opportunity to lie in the hot sun and to live in hotels of high quality, enjoying servil waiters serving you. Becides, the beaches are all with “the blue flag” that means that they are pure and clean. If you prefer to visit interesting places you will see famous castles and the city of Valencia which is considered to be one of the most beautiful cities in Europe. You'll find sthe signs of the ancient cultures, who allways looked at this region as a great place to live and work for. Find out yourself about Valencia - visit Valencia.

Andalusia is washed by the Atlantic Ocean and the Mediterranean Sea. One is exciting and harsh, another is gentle and calm. Regardless of what you choose - you will truly enjoy your vacation in Andalusia!

Luxury villas, charming apartments, affordable holiday homes are waiting for you at en.toskana-netz.de. Discover Tuscany with us!

Are you looking for vacation rentals in Liguria? The portal en.ligurien-netz.de can offer you an extensive database of holiday homes, cottages, hotels and apartments in Liguria.